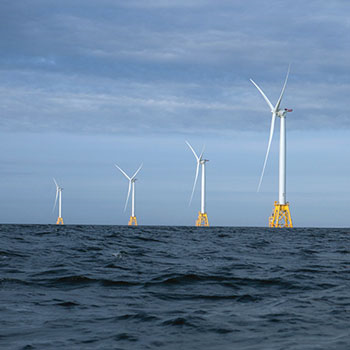 In a 3-0 vote Thursday, the three-member Commission voted to authorize the preparation of Environmental Impact Reports for two projects, CADEMO, a joint venture by CIERCO Corp. and SBM Offshore, and another project by Ideol. These environmental studies are necessary prior to any decision on final project approval.

“The CADEMO project creates a ‘high road’ model with local economic development and union jobs, which will build a foundation for the future expansion of the industry,” Rader said. “These projects are of enormous scale, with unprecedented logistical challenges, but they can create a sizeable local supply chain with good green jobs – if the ‘high road’ model is followed. Without careful planning, California’s offshore wind projects could be imported rather than fabricated and assembled locally.”

The CADEMO project proposes to construct four floating turbines, each of 12–15 megawatts (MW) electrical production capacity, which will test multiple engineering concepts for the floating wind turbine foundations, their mooring systems, and other technologies. The recipe for local economic benefits derives in part from a High Road Training Partnership grant from the California Workforce Development Board to the San Luis Obispo County Office of Education, with participation by CIERCO, the State Building Trades Council, IBEW 1245, Cal Poly, REACH, and the Workforce Development Boards of Ventura, Santa Barbara and San Luis Obispo counties. “This workforce partnership could be a game changer for how offshore wind is perceived statewide – not just as green energy, but as a real driver of prosperity,” Rader said.

Rader said the state has been lagging behind East Coast states on offshore wind, but today’s decision is a step toward real action. “In contrast to fixed-bottom offshore wind that is common in Europe and soon to be ubiquitous on the East Coast, floating offshore wind is in its infancy, and California has an opportunity to be a player in the global market.”

California’s current plan for meeting its SB 100 greenhouse gas targets includes the installation of 10,000 MW of offshore wind by 2045 off the Central and Northern Coasts because the resource complements the solar production profile which improves system reliability while lowering costs. The CADEMO project, which could be operational by 2026, will provide a roadmap for scaling up California’s own capabilities to achieve that goal.